I bought a new external 500GB USB drive for my laptop, which happens to be a Mac that I also run Windows 7 in a Virtual Machine. I wanted to be able to use this external drive on my Mac to store files such as larger Virtual Machine’s, software, etc while at the same time keeping the ability to be able to read this drive from a Windows machine without installing any software on the Windows machine. This lesson shows how exFAT as well as other format types stacked up for this purpose and what my final result was.

I began to Google for my solution which brought up a ton of forum and blog posts that had different ideas. Thus the reason for this lesson so that someone might benefit from what I tried, as I know the ideas and things tried by others that I found were useful to me.

Why Not Use NTFS?

I’m currently running Snow Leopard 10.6.1 which can read NTFS volumes but not write to them natively. So I started to investigate other file system types to see what might work the best.

The USB drive that I bought actually came preformatted with a FAT32 file system. I thought this might work great, however I started copying a 10GB Viirtual Machine file to the drive and it immediently failed with an error. A quick search turned up something which I haven’t had to deal with in a long time… FAT32 filesystem has a 4GB file size limitation. http://en.wikipedia.org/wiki/FAT32#FAT32 So, that definately won’t work for what I’m trying to do as I have a ton of files (VM files, ISO’s, etc) that are larger than 4GB.

I stumbled across the new exFAT file system (also referred by some as FAT64) in some blogs when searching how to share an external drive between a Mac and PC. http://en.wikipedia.org/wiki/ExFAT It sounded like the possible answer. exFAT is a newer file system that can be used by the newer versions of Windows (e.g. my Windows 7 VM) but the question remained, can Snow Leopard read the exFAT file system with out a lot of work? A lot of blogs didn’t think so but none that I found actually tried it. So, let’s give it a shot!

Here’s my new blank drive ready to be formatted with whatever filesystem I’d like. Let’s try exFAT. 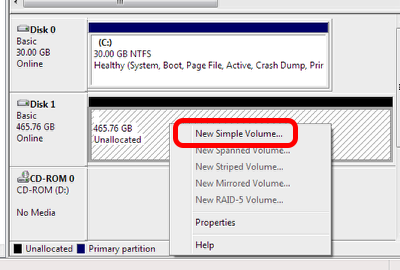 Here are my options under Windows 7. Since I only have 1 disk, I can only choose “New Simple Volume”.

Choosing the volume size, which we’ll allocate the full space.

Assigning the drive letter. In this example, we’ll use “E”. 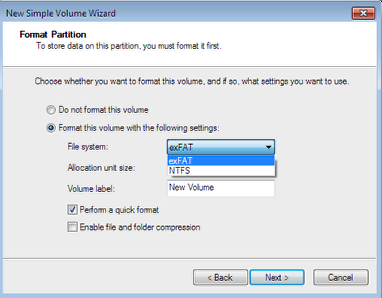 Changing the volume label so I can identify the drive. 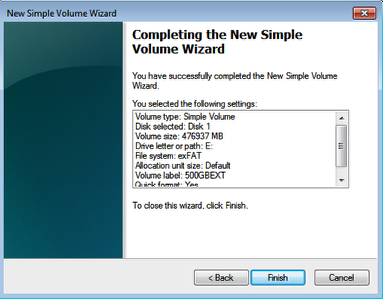 Here’s the newly formatted volume in Disk Management. Everything looks good so far. 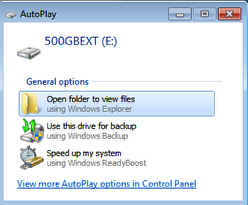 Here are the autoplay options when I plugged the newly formatted exFAT drive in. Notice you can use this new filesystem for backup and for ReadyBoost, just like a NTFS volume can.

I think this screenshot says it all. The Mac didn’t know what to do with this drive and wanted me to “initialize” it — which would erase everything on the drive if I proceeded with that option. I selected “ignore” and that’s basically where trying to use a exFAT drive on a Mac stops. I searched numerous forum posts and blogs and there just isn’t a good solution yet. Perhaps sometime in the future, I’m sure we’ll be able to use exFAT.

What was the final solution? 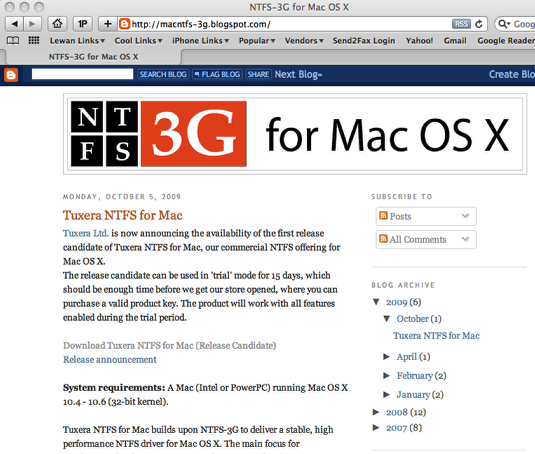 Since I really wanted the ability to use my drive on a Windows machine, I went back to NTFS. It’s a great filesystem and I figured if I could get my Mac to beable to read and write a NTFS filesystem, that would work great. I ran across basically 2 solutions that you can use for this.

#1 – Paragon NTFS for Mac OS X – http://www.paragon-software.com/home/ntfs-mac/
Paragon looked like it would work great so I downloaded and installed the trial version off their website. Performance seemed good. I was able to now read and write to my NTFS formatted external drives. At only $19.95 (Fall Special right now), it didn’t seem like that bad of an option. Yet, I ran across the other solution on a blog, which is free. So let’s examine that one.

#2 – NTFS-3G for Mac OS X – http://macntfs-3g.blogspot.com/
NTFS-3G was referred as a Paragon alternative without the cost. So this got me interested. I removed Paragon from the system and installed NTFS-3G. After a reboot, I was able to read/write to my NTFS drives, and without paying anything. Performance in my very simple file transfer tests seemed right on with Paragon’s test results. I copied over 85GB of data to my brand new 500GB external drive, which is formatted with NTFS and everything seems to be working like a champ. I’ve also taken the drive and presented it to my Windows 7 machine and it worked great on there too. The only “gotcha” that I’ve ran across so far is that you need to “Safely Eject this Hardware” from within Windows or you’ll get a complaint by NTFS-3G about data integrity. I’ve usually tried to always remove external drives with that method, so that doesn’t really change anything for me.
The direct link for the free version of NTFS-3G is down on his blog a little bit. It looks like they are releasing a paid version called Tuxera NTFS, but NTFS-3G is still available. As of this writing, the latest version is NTFS-3G 2009.4.4, found here: http://downloads.sourceforge.net/catacombae/NTFS-3G_2009.4.4-catacombae.dmg?use_mirror=

28 thoughts on “Sharing an External Drive Between a PC and a Mac, exFAT Discussion, Results”